Teamwork, unshakable spirit, strong self-discipline, and persistence - all of this works both in the office and on the football field.

AIM started own football team only three month ago, yet the football players have already managed to play 8 games, winning and seeking a revenge. 50% of the team line-up consist of AIM’s employees, in particular ATO veterans. The football players claim that work and sports are the best rehabilitation technique.

"I have been thinking about starting a football team for quite some time. I believe I am a team player,” Yuriy Shchyrin, team captain and CEO at AIM shares. “When I started playing football, I trained twice a week, but I have figured that this was not enough. You need a systemic training loads in order to stay physically fit. The system of habits has a direct impact on efficiency."

Ievhen Zadorozhnyi, coach of the Football Top League is training AIM’s team. This is a highly trained professional who fostered Ukrainian mini football champions. The training sessions take place on Tuesdays and Thursdays at 7:15 a.m. Early morning meetups of the players are a very insightful test which reveals whether or not a person has a strong desire to play. 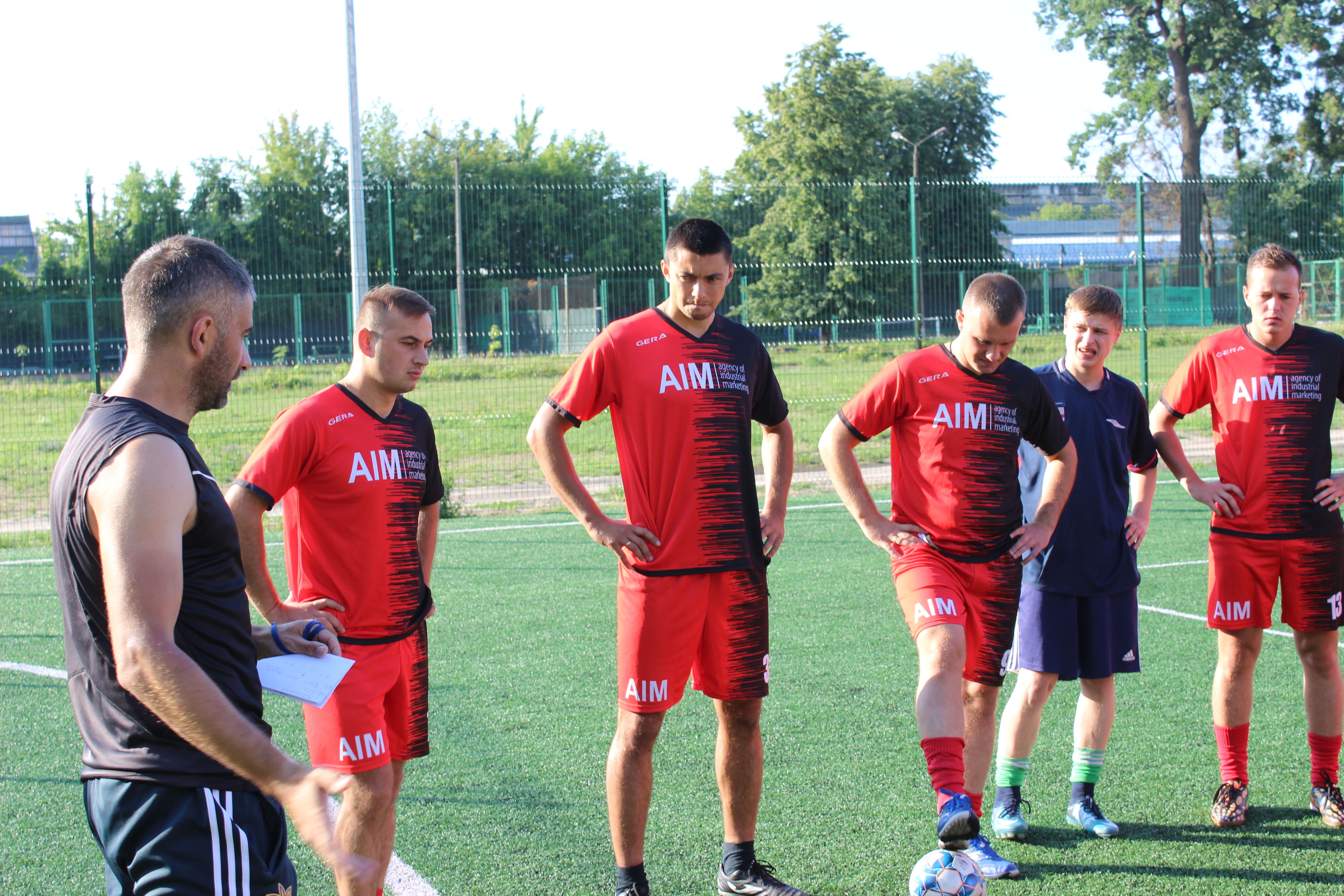 As a matter of fact, the actual mechanism of mastering the skills in particular sport in many ways resembles corporate strategies and methods - both in marketing and sales system. The team founder and players see football as a kind of instrument designed to attain the goal. Winning the match which the players strive for includes small goals. With that in mind, the coach came up with a weekly training routine which involves practicing specific techniques each day. For instance, seven-diamond defense or the so-called butterfly, diagonal pass etc.

What is the winner’s secret? Discipline! This contributes to 90% of efficiency.

"Discipline is everything. So, I believe training implies having cast-iron discipline,” Yuriy emphasizes. “The team is a message of sorts and an element of self-discipline. Nothing brings people closer together than having a common goal and a sense of purpose. We aim not to show off and outplay someone, but rather win the match.

Sport is a challenge. Take it or leave it. To win, we have to become faster, better with each training session. We have got a chance at catching up and outdoing professional players. Stubbornness, cohesive teamwork and intelligence coupled with passion. There is no other way to do it. Only work. If we win this match, we will be ready to face a tougher one next time."

You have a chance to become a member of this fantastic team. AIM’s football team invites new players to join in.

We are waiting for everyone, who is ready for draining training sessions twice a week at 7:15 a.m. and who is just as committed to winning as we are, at the following address: 11 Kulibina St. (Nyvky Metro Station, Kyiv).

Train with the best ones!